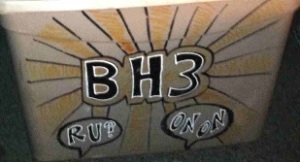 Bako Rrrrs, and BH3 Wankers and Harrietts, we are at a defining moment in the Hash.  There appears to be an artificial riff growing in the time space continuum of Hashing here in Bakersfield.

Now normally when we have for profit runs cumming to our fair town it is not for us to matter.  Whether it’s Tinker Bell’s Pooping Unicorn Rainbow Run, Uncle Buck’s Man Boy Crush Rush or Testical Festival’s Spay and Neuter trot, we wouldn’t give it a second thought.  Heck many hashers have participated and a number have even won these races.  But when some Carpet bagger corporate money grubbing group wants to put on a run with beer……..well this is personal.  Which brings me to my point, why the majority of hash has stated a hearty F*@K N0 to participating is such a shame.  One of our members (unnamed for now to protect his health) is proposing to support these interlopers by participating in their event.

So what do you think Wankers, what should we do with the one that blasphemes the hash.  Should we exile him and his descendants from Hash Kolob for seven time seventy generations, or should instead treat this temporary dalliance one that will fade as the pretty interloper moves on to Orange, Fresno and other locals far and near.  Or even (Gasp) as this hasher suggests we form a team and (gulp) actually participate in the run.

What to do is the question which can be answered at our regularly scheduled Hash this Monday January 27, 2014 at Panorama and River Blvd.  http://goo.gl/maps/9p5qs Our hare F.A.G’s Naked Rain Dance Run promises a Hash full of $hitty Beer, $alty $nacks and mammories to remember forever or until next week anyway.  He also highly recommends trail shoes and head lamps. Cost for Hash is normal $5.00,  for you “Tappers” we have a one time special price of FREE.