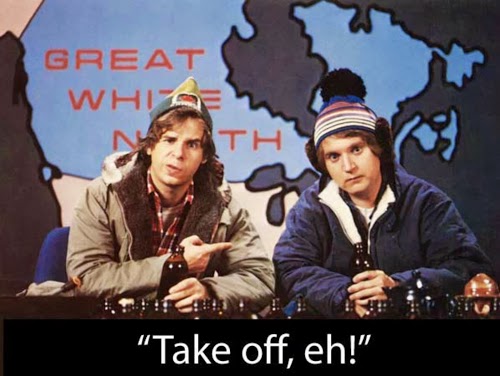 Hasher Will: Ehh I-Did-A-Rod you Tabernac hooser douce were have you been? Called you all last week, we are out of beer at the bachelor pad.

I-Did-A-Rod: Naugh you goof, I told you two weeks ago I was heading up to the Great White North for work.

Hasher Will: Oh take off ehh I remember now it was Thursday at lunch, I was already drunk..hehehe. So ehhh what did you do all week.

I-Did-A-Rod: Hey check it out ehh, I learned a new way to stick my rod in to the ground during cold weather, or as we call it in the Town of Of October to May, and not let it freeze.

Hasher Will:  Yea Ehh and how did you do that?

I-Did-A-Rod:  Well you spanked it every chance you get, and boy did I practice every night back at the hotel. Check it our ehh, they had CinaMax.

Hasher Will: So ehhh now that you are back in Bakosfield aren’t you supposed to be doing Hash this week.The wankers have been asking.

Hasher Will:  No ehh you have been replaced by that hooser osti caliss tabarnack Crusty dude, I forgot his second name.

I-Did-A-Rod:  Ehh, that’s cool….speaking of cool one why don’t we get a Two-Four.

Well BH3 Wankers while hasher Will and I-Did-A-Rod get re-acquainted. Crusty (the name that shall not be mentioned) has volunteered to Hare again. I’m sure that walking leech Jason shouldn’t be far behind. Crusty said he might be a little late, something about meeting some “new friends” up on Mourning wood drive, you know, the location of last weeks third beer stop.

Hash begins at 6:29 from Beale Park on Oleander and Palm, south of California from BHS. Link to A is as follows: http://goo.gl/maps/Ewn38