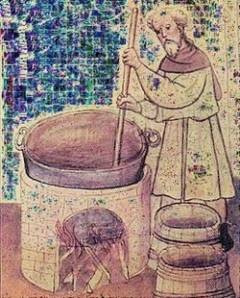 From Man’s Sweat and God’s Love, Beer Came into the World

The Lord PBR hath rejected and forsaken the current BHHH generation to his wrath. For the children of this Hash have done that which is evil in his sight, they have set their beer abominations in the house which are called by name: Natural Ice, Milwaukee’s best, Old Milwaukie, Keystone and the illegal immigrant beers Tecate and Corona. They have built the high places of said beers on trail and down downs that should be reserved for the most Holy Sacrament of PBR.

Therefore, behold, the days come, saith the Lord of all beers, that it shall no more be called a true Hash but be lead by a FAG and his false monk Chris into the valley of Slaughter: for they shall be runeth over on 24th St, Coffee Rd, and Rosedale Hwy, till there be no place left to dodge trucks. And the bloated dead bodies of this Hash shall float on the Kern River and be food for the birds of the heavens, and for the beasts of the earth; Glocksucker if not among the dead already will die of over work and none (not Mithaian, Sumarian, Babylonian or Zoroastrians) shall frighten them away.

Then will cause to cease from the city of Bakersfield, and from the streets of Oildale and Green Acres, the voice of MED-FLYS, and the voice of WWW.BHHH.ORG, the voice of BHHH on Facebook and HashSpace; for the land shall become a waste. BH3 Hash you have sinned away your day of grace and so enraged your Creator of all Hops and Yeast.  You should be MOURNING FOR YOUR SINS, begging forgiveness of Lord PBR, who is drunkth with rage after viewing your transgressions from his beer goggles.

This is your only warning. You’re redemption is at hand however. For a tithe fee of $7.00 and journey along a solemn trail of 3-4 miles and an equal number of PRB beer stops at each seeking an intervention from St. Arnold of Soissons, for only then shall destruction of BH3 be halted, that is until December 21st anyway.